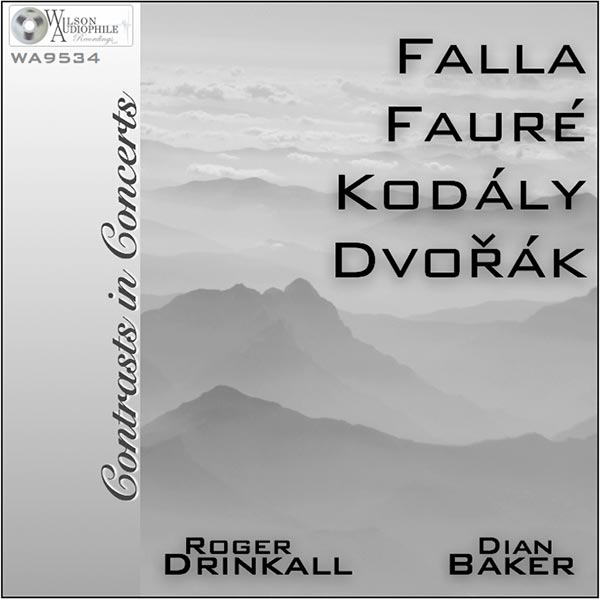 The concert literature for every instrument is dominated by the concertos written for them. These massive works are the most iconic challenges every player faces. The cello is no exception. Its repertoire is rich with concertos, some of them among the finest works of the composers who wrote them. One might make a case for the Dvořák cello concerto being as fine a work as any Dvořák wrote. If this and a few others are the foundation of the cello literature, then perhaps the many cello sonatas are the next tier which rest on the foundations of the concerto masterpieces. Above the tier of sonatas, further up the structure, come the small works that fill out recital programs, salon performances, and encores. Cello recitals are replete with smaller works that add variety and showcase the instrument in unique ways, and many of these smaller works become some of the most well known and beloved pieces in the canon. A good example of this is the Fauré Elégie heard on this CD, enjoying at least as much familiarity as any of the big concertos. The other works on this CD are all fine examples of this body of small works for cello. Each one is unique and endearing, and each one is lovingly performed by the Drinkall/Baker Duo.

Three Spanish composers stand above the rest: Manuel de Falla, Enrique Granados, and Joachin Rodrigo, with apologies to Albéniz, Turino, and Sarasate. This Spanish big three created the most repertoire and established the sounds of Spain in the most lasting ways. Certainly, Manuel de Falla can be considered among the greatest nationalistic composers and came by his influence naturally. With parents from two different regions of the country, he was exposed to a great variety of song and dance that enriched the daily lives of his countrymen. In 1914 he published a suite of songs titled Siete canciones populares españolas. The songs themselves literally take the listener on a tour of the country, sampling the sounds of the distinctive cultural regions that exist in Spain. The composer begins in Murcia in the Moorish south and moves upwards through Aragon, Catalonia, finally arriving in the northern Andalusia. The songs we hear are a smorgasbord of ethnic song and dance unmatched by any other Spanish composer. No wonder this song cycle spoke so directly to the people of Spain. But they are so colorful and flavorful that they are ideal candidates for transcription versions, and there have been many. With the composer’s assistance, Paul Kochanski, the noted violinist, transcribed six of the seven songs for violin and piano and renamed the work Suite Populair Espangnole. Manuel de Falla was so taken with the result that he even dedicated the published version to Kochanski’s wife. Maurice Maréchal transcribed Kochanski’s version into the suite for cello and piano which we hear in this recording. These movements are individually quite short and are often rearranged by the performers in various orders.

The first song, El Paño Moruno, from the south of Spain, is an energetic dance with swirling rhythms, whose words warned young women to be wary of men. Nana is an Andalusian lullaby of exquisite tenderness and said to be one which de Falla’s mother often sang to him while a child. Canción is a spirited and innocent song well known across Spain whose words speak of being love-sick. The fourth song, Polo, exhibits the virtuosity of flamenco and gypsy influences. This is the most flamboyant of the songs, and the piano accompaniment flashes with brilliance in this showy, thrilling dance. Asturiana is another lullaby, this one from northern Spain, and is full of sadness and melancholy. The lively and joyous Jota closes the suite with vigor and good humor. One can hear the castanets flailing, and the Spanish love of life is on vibrant display.

Easily one of the most familiar and beloved of cello melodies is the Elégie by Gabriel Fauré. This haunting melody has become a staple of the cello repertoire. Like many of the works featured on this disk, it has connections to the chamber music of the composer. It was intended to be the slow movement of a cello sonata, but somehow, after its completion, Fauré lost the creative steam to write outer movements. It is a very unfinished cello sonata but a very complete stand-alone work of elegiac beauty.

The piece begins with simple repeated throbbing chords in the piano soon allowing the entrance of the cello who sings a most soulful song. There is much melancholy and resignation in the simple tune, and we are to ponder where this sadness is taking us. But a more optimistic and fresh middle section interrupts and brightens up the mood. This time the piano leads the way with light arabesques and the cello imitates. But soon enough the clouds return, and, in a passionate upward sweep, the cello soars again to an even more emotional version of the beginning melody. It is clear there is a story line here, but Fauré does not disclose it. The listener knows though, at the end, that we have been on a short but poignant journey, one every cellist the world over loves to take again and again.

Zoltán Kodály and good friend and fellow Hungarian composer Bela Bartok hold a rather unique place in the history of Hungarian music and ethnomusicology as well. They shared a passion for the preservation of their own culture and recognized that growing globalization would eventually crowd out the most distinctive, unique ethnic differences in world culture. Determined to capture all they could before it was gone, they traveled across eastern Europe recording and filming the music and dance of people living in villages and towns all across Hungary and its neighbors. This treasure trove of ethnic history was a prescient archive of a world that soon was to disappear in the wake of two world wars. Naturally, the music they discovered and documented also found its way into their own compositions, both in literal quotations as well as in their own folk-like imitations of folk melody and dance.

A cellist himself, Kodály wrote several works for cello, albeit all smaller works. This sonata, written in 1909, was his first cello sonata. The second sonata, coming in 1915, was for unaccompanied cello and is truly one of the most formidable cello works of the twentieth century. The unaccompanied sonata stretches the vocabulary of the instrument in unique ways, but, in contrast, the sonata for cello and piano, heard here, is a more conventional sound vocabulary, which makes sense when you know that Kodály wrote this when he was just 28.

Again, like the Fauré Elégie, this work was meant to be a three-movement work. Fauré completed only one movement, and Kodály completed two. But by the time Kodály got around to trying to add a third movement, he realized his own style had evolved too much to match the early style of the existing movements, so two movements it would remain.

The first movement is rhapsodic and improvisational, exactly as the Fantasia title would suggest. This somewhat free-wheeling music maintains its contemplative sonority throughout and ends in quiet reflection. The second movement immediately begins with the Hungarian sound we have been expecting. Dance rhythms interplay with lyrical song passages and demonstrate Kodály's marvelous grasp of his musical origins. The end of the second movement unusually returns to the themes of the opening Fantasia and thereby gives this two-movement sonata a formal cohesiveness that is fulfilling and satisfying.

Dvořák's works for solo cello are few. Aside from the concerto, which is truly one of the greatest concertos ever written for any instrument, there are relatively few other works. Though he was a string player himself, a violist, it appears Dvořák did not really care to write for the cello. No sonatas, for instance, which is a bit unusual given his admiration for the work of Brahms, who wrote two. Dvořák arranged some of his Slavonic Dances for cello and piano, and there a couple of obscure small pieces, and then there is the Polonaise heard on this recording. Perhaps the second most important cello work of Dvořák after the concerto, the Polonaise held high enough regard for Dvořák that he reused in a later work. With a little different twist than the Faure Elégie, instead of being part of a larger work that never got finished, Dvořák intended this to be a stand-alone gem and liked it so much that he reused some of its themes in the third movement of his String Quartet No. 11 in C Major, Op. 61.

Soon after the premier of the Polonaise, in 1879 the manuscript was lost, but in 1936 it was rediscovered and published and has subsequently entered the standard cello repertoire. The polonaise is a dance of Polish origin, with a distinctive dotted trademark rhythm. Many composers have written polonaises: Chopin, of course, Mozart, Beethoven, Tchaikovsky, Rimski Korsakov. Dvořák wrote many himself, which is only natural living next door to its country of origin.

This Polonaise begins with an introduction in the cello alone which gives no real clues as to its destination, but with a flourish it gathers the piano together and launches into the rhythm that it shares with all other polonaises. A lyrical middle section departs from dancing to enter a world of lyricism and singing but with a virtuoso flourish returns to the spiky rhythms which are its namesake and ends with energetic back and forth interchanges with the piano as it comes to a brilliant finish.